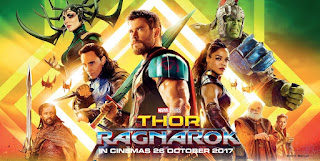 Check out the awesome THOR RAGNAROK Trailer ! Must watch.. Check it out :D


Thor: Ragnarok is a 2017 American superhero film based on the Marvel Comics character Thor, produced by Marvel Studios and distributed by Walt Disney Studios Motion Pictures. It is the sequel to 2011's Thor and 2013's Thor: The Dark World and the seventeenth film of the Marvel Cinematic Universe (MCU). The film is directed by Taika Waititi with a screenplay by Eric Pearson and the writing team of Craig Kyle and Christopher Yost, and stars Chris Hemsworth, Tom Hiddleston, Cate Blanchett, Idris Elba, Jeff Goldblum, Tessa Thompson, Karl Urban, Mark Ruffalo, and Anthony Hopkins. In Thor: Ragnarok, Thor must escape the alien planet Sakaar in time to save Asgard from Hela and the impending Ragnarök.

A third Thor film was confirmed in January 2014, with the title and involvement of Hemsworth and Hiddleston announced that October. Waititi joined the film as director the following October, after Alan Taylor chose not to return after directing the second film, and Ruffalo joined the cast, crossing over the character Hulk from other MCU films. With the Hulk's inclusion, elements from the 2006 comic storyline "Planet Hulk" were adapted for Ragnarok. The rest of the cast was confirmed in May 2016, with Pearson revealed to be involved with the film at the start of filming in July 2016. Principal photography took place from July to October 2016 in Brisbane and Sydney, Australia, with the film also having exclusive use of Village Roadshow Studios in Oxenford.

Thor: Ragnarok premiered in Los Angeles on October 10, 2017, and was released in Australia on October 25, 2017. The film is scheduled to be released in the United States on November 3, 2017, in 3D, IMAX and IMAX 3D. Plot Two years after the Battle of Sokovia,[N 1] Thor has been unsuccessfully searching for the Infinity Stones, and is now imprisoned by the fire demon Surtur. Surtur reveals that Thor's father Odin is no longer on Asgard, and that the realm will soon be destroyed in the prophesied Ragnarök, once Surtur unites his crown with the Eternal Flame that burns beneath the city. Thor defeats Surtur and claims his crown, believing he has prevented Ragnarök. Thor returns to Asgard to find his adopted brother Loki posing as Odin. Thor forces Loki to help him find their father, and with directions from Stephen Strange on Earth they locate Odin in Norway. He explains that he is dying, and that his passing will allow his firstborn daughter Hela to escape from a prison she was sealed in long ago. Hela had been the leader of Asgard's armies, and had conquered the Nine Realms with Odin, but had been imprisoned and written out of history after her ambitions became too great. Odin dies, and Hela appears. She destroys Thor's hammer Mjolnir, and when Thor and Loki attempt to flee through the Bifröst Bridge, she pursues them and forces them out into space to die. Hela arrives in Asgard, destroys its army, resurrects the ancient dead who once fought with her, and appoints the downtrodden Asgardian Skurge as her executioner. She plans to use the Bifröst to expand Asgard's empire, but Heimdall steals the sword that controls the Bridge, and hides away with the rest of Asgard's citizens.

Thor crash-lands on the planet Sakaar, a garbage planet surrounded by wormholes. He is captured by a mercenary named Scrapper 142, and taken to serve as a gladiator for the planet's ruler, the Grandmaster, whom Loki has already become ingratiated with. Thor recognizes 142 as one of the Valkyrie, a legendary force of female fighters who were killed defending Asgard from Hela long ago. Thor is forced to compete in the Grandmaster's Contest of Champions, facing his old friend the Hulk. Thor almost defeats the Hulk, before the Grandmaster fixes the fight to ensure the Hulk's victory. Still enslaved, Thor attempts to convince Hulk and 142 to help him save Asgard, but neither is willing. He soon manages to escape the palace and find the Quinjet that brought the Hulk to Sakaar. The Hulk follows Thor to the Quinjet, where a recording of Natasha Romanoff makes the Hulk transform back into the human Bruce Banner for the first time since Sokovia. The Grandmaster orders 142 and Loki to find Thor and the Hulk, but the pair come to blows and Loki forces her to relive the deaths of her fellow Valkyrie at the hands of Hela; she decides to help Thor, taking Loki captive to prove her goodwill. Unwilling to be left behind, Loki provides the group with the means to steal one of the Grandmaster's ships. They then liberate the other gladiators who, led by Korg and Miek, stage a revolt. Loki attempts to betray his brother to gain a reward from the Grandmaster, but Thor anticipates this and leaves him behind. Loki is soon found by the gladiators. Thor, Banner, and 142 escape through a wormhole to Asgard, where Hela's forces are attacking Heimdall and Asgard's citizens. Banner becomes the Hulk again, and fights Skurge and the resurrected warriors with 142 while Thor faces Hela. Loki and the gladiators arrive to help, and the citizens board their large ship; a repentant Skurge sacrifices himself to allow their escape. Thor loses an eye, whereupon he has a vision of Odin that helps him realize that only Ragnarök can defeat Hela. He, 142, and the Hulk distract Hela while Loki finds Surtur's crown and places it in the Eternal Flame. Surtur is reborn and destroys Asgard, seemingly killing Hela. Thor and the others escape aboard the Grandmaster's ship with Asgard's remaining citizens, where Thor is crowned king and decides to rebuild Asgard on Earth. In a mid-credits scene, they come across a large spaceship. In a post-credits scene, the Grandmaster confronts his subjects, who are still fighting the revolution started by the gladiators.